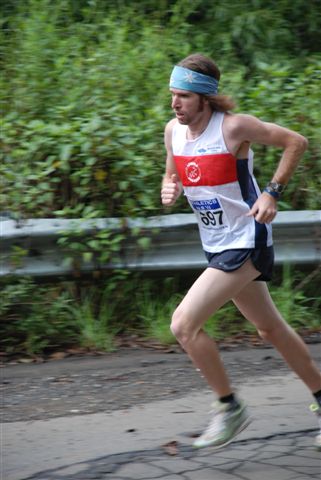 Five-time Australian mountain running representative Stephen Brown of the Kembla Joggers Club won his third NSW mountain running title in succession on Mt Burelli, although well off his personal best time of 50:07 for the course. Brown clocked 17:34, 18:09 and 18:04 for each of the 4km loops from the panoramic Kembla Lookout in mostly overcast, still conditions, finishing with a final time for the 12kms of 54:13.

Keeping him honest all the way was well known ultra distance champion Dr Tim Cochrane, a paediatric medicine specialist-in-training whose running training is limited by an on call pager which means he has to spend a great deal of time within a minute or two of a childbirth centre when a difficult birth occurs. Cochrane clocked 18:08, 18:33 and 18:37 to have Brown in sight for most of the run, and finished with 55:10. In third place was smooth running Wollongong galloper Phil Whitten who ran 59:16 to hold off 4th place getter Pete Conway on 60:10. Paul Stein was first M40 in 67:50.

The spectator crowd were abuzz for the 8 km women’s race with the arrival on the start line of Commonwealth Games representative Lauren Shelley, a 2:33 marathoner recently arrived from Western Australia in the Illawarra at the scenic beachside town of Gerringong. Shelley did not disappoint, with a most impressive mountain running debut. She ran 20:25 for the first lap and barely slowed her strong running performance in the second, clocking 20:40 to total 41:05 for the distance. Alisa Williams was second in 43:42 and Melanie Foster, a 4:39 1500m runner, was third in 49:28.

Charlie Brooks, 5th at the 2008 Australian Junior Mountain Running Champion at the age of 15, showed he will be a strong performer at the 2009 national title when he blitzed the junior men’s race in 37:57. Jake McCraken, well up for the first 6 kms, suffered a muscle strain and hobbled in to complete the race in 55:03.

Dave Higgins, Neil Barnett and their team from Kembla Joggers and Athletics NSw did an excellent job in organising the race in trying conditions. Well, you would think it was trying too if there were leaches running up your legs!
A pity there weren’t more competitors. But as Geoff Stalker observed, what mountain runners really go for these days is the long, tough, grinding trail run that is well worth getting out of bed for. His most popular race in the Wollongong mountain series is Stalky’s Horrible Half, a fabulous race, even for an M75, according to Tony Krantzcke.