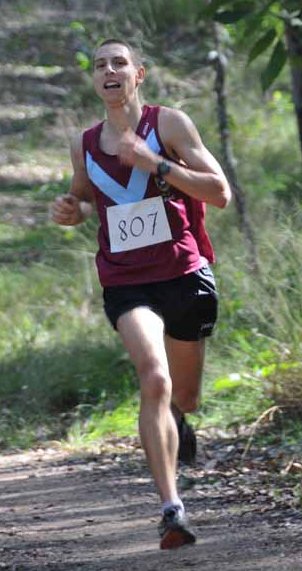 A record number of participants in the Australian Mountain Running Championships in Brisbane and fine, sunny weather produced some very close results. The open men’s 13.3 kms hallmarked a new era in men’s mountain running in Australia as unheralded QLD local Patrick Nispel produced a sizzling finish to win in 53.31, just 11 seconds ahead of Tasmania’s Jordan Harries, with Nicholas Wightman and Gerard Robb of Victoria 3rd and 4th respectively in 54.42 and 55.13. Nispel is a Swiss runner with personal bests of 3.51 for 1500m, 14.34 for 5000m, 8.59 for the 3000 steeplechase and 68.23 for a half marathon he won a week earlier. Edwin Perry of NSW was 5th in 55.28 and former national champions Mark Bourne and David Osmond of the ACT were 6th and 7th in 57.07 and 57.41.
Pre-race favourite Kate Siebold-Crosbie of Victoria led from the start in the women’s 8.2 kms and had a 2 minute gap on ACT champion Elizabeth Humphries at the summit with 3 kms to go. Humphries, a renowned downhill runner, clawed back much of the gap in the downhill run home but Siebold-Crosbie still ran out a comfortable winner in 37.41, with Humphries second in 38.21. Only 4 seconds separated the next three finishers, with Championships organiser Hubertien Wichers 3rd in 39.05, Clare Durrant of QLD 4th in 39.07 and Lucy Blaber of QLD 5th in 39.09.
In the junior women’s 4.8 kms, pre-race favourite Bronwyn Humphrys of Victoria, 13th in the World Junior Mountain Running Championship last year, looked to be in trouble at the end of the first of the two out and back runs as she languished in a chasing pack behind the two leaders. However, she paced herself brilliantly to pull off a 3 second victory in a fast 21.02 from QLD’s Sarah Deuble. Only 6 seconds separated the next three: Melanie Kaasinen from QLD in 21.19, Annabelle Wilson from Victoria in 21.23 and Lucy Young of QLD in 21.25.
Jordan Nelson from Victoria, 2009 national junior champion, had an impressive win in 33.17 in the junior men’s 8.2 kms. Dane Bird-Smith of QLD ran 34.00 to just hold off fellow Queenslander Ben McCronan by 3 seconds, and Max Neuman of QLD was 4th in 34.36.
There is a further writeup by Tim Crosbie at http://www.athsvic.org.au/cache/NewsFile/50062%20June.pdf
Photos by Tim Crosbie on the Athletics Victoria Facebook page at
http://www.facebook.com/#!/media/set/?set=a.10150194251122979.317355.8620997978&closeTheater=1
And here’s the video production by Tim Crosbie…..

photos taken by Tyrone Marega at

by John Harding at
http://hardingjohn.smugmug.com/Sports/Mountain-running/2011-Australian-Mountain/
and Joep Buijs at
https://picasaweb.google.com/117212464963011705949/2011AustralianChampionshipMountainRunning?authkey=Gv1sRgCObegLeN-pDEiQE&feat=directlink